Bombardment is the word which comes to mind when I scroll through my various social media worlds. In my desire to connect with my tribe, look through pretty photos, or (let’s be honest here) snoop on the goings on of others, I am besieged by outrage. My community is full of goodhearted and precious individuals yelling at each other or into the void about myriad hot-button topics.

We yell using typed words or memes or articles or videos to discover both our allies and our enemies, to split the overwhelming, bewildering, and heartbreaking into the more manageable us versus them. Outrage is easy and primal and it feels so damn good. We find safety and superiority in gathering the like-minded around us and belittling the dummies who are too stupid to come over to the right side of any and all issues.

But continuous outrage depletes energy which can be better spent by each of us doing something instead of contenting ourselves with feeling something. The people I most admire in the world, who are changing lives and communities and organizations, often began their important work after some form of outrage was ignited, but they used that outrage to fuel actions instead of stewing in negativity and anger. They felt it and then they moved on into their mission.

Too many of us aren’t moving on into our missions. Instead, we are bathing ourselves in outrage, rolling it in our mouths to savor the taste of it, painting the walls of our souls in it. We get angry about what someone said or did and then we repeat it over and over again to emphasize how awful it was, how outrageous, how unacceptable, how very THEM  of them.

We build walls with our outrage and towers at the top of those walls so we can look down at all the idiots outside the walls, taunting and attacking them for not being smart enough or wise enough or enlightened enough to knock on the gates and beg for entrance into our community of the better-thans.

Choosing kindness, love, brave connection with the us inside the them doesn’t mean ignoring what is destructive. It doesn’t mean tolerating the intolerable. It simply means that we choose to construct a place of peace from which we act to change what must be changed.

For years, I spent more time worried about being right than being kind. Facebook’s “On This Day” feature brings back a lot of those memories. I choose a different path now. Not all the time, not every single day. But more often than not, I try to choose kindness.

The title of this post was inspired by one of my favorite scenes from one of my favorite classic films, Harvey. To amend what Elwood P. Dowd says in the film: In this world, you can be oh so right or oh so kind. For years I was right. I recommend kind. 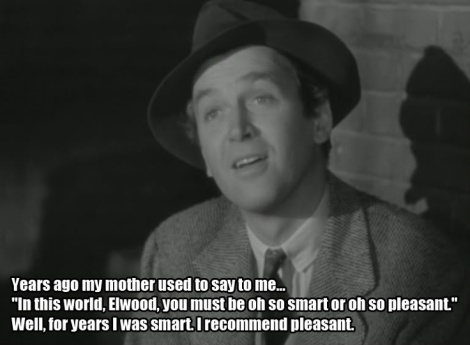