I worked out in front of my girls today. I didn’t want to exercise at all. It was after 5:00 pm, I was tired, the house was warm, the girls were on the couch playing games on their computers, and I wanted to join them and sip sweet tea instead of working my butt off to Jillian Michaels’ 30 Day Shred DVD. I was embarrassed by the idea of them watching me exercise, seeing me sweat and gasp for air during some of the more difficult moves, and I almost made them leave the living room. And then I thought about the lesson I’d teach them by asking them to leave and the lesson I’d teach them if I let them stay.

Asking them to leave seemed like it could teach them that pursuing fitness and health must be done in secret, like working to become stronger was something of which to be ashamed. Letting them stay would be a tad awkward for me. I sweat a lot. I jiggle a little. I have to do the less advanced moves sometimes. I’ve even been known to swear once or twice. Quite simply, I struggle to make it through the workout. But I decided it would be good for my girls to see me struggle, to see me work hard, to see me do something I do not particularly like in pursuit of a goal. So they stayed at my invitation. When it was over, we laughed over the most difficult moves and chatted about health, strength, and learning to love yourself no matter what your size.

One of my least favorite parts of parenting is the being-a-good-example bit, but it is one of the most important tasks facing me every single day. While everyone knows small children are impressionable, it’s easy to forget tweens and teens are quite impressionable, too. Add in their uncanny ability to detect duplicity and their willingness to call out double standards in a heartbeat and it becomes even more necessary to practice whatever it is I am preaching. I think I did that today. It wasn’t easy and I didn’t particularly want to do it, but I did it anyway. And one of the most important lessons my girls need to learn right now is to do worthwhile tasks even when they are difficult, even when there are other easier things they’d rather do. Of course, it isn’t just a one-off lesson. I’ll be called upon to teach it again and again. But that’s what I signed up for so that’s what I will try to do. Even if I sweat and jiggle while doing it. 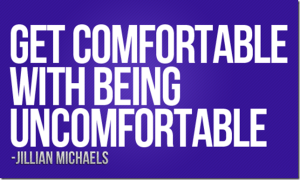