*This is a freewriting piece I did a couple weeks ago. It seemed appropriate to share it on the four-week anniversary of my dad’s death.*

It started with your glasses the night you died. As the paramedics were working on you in your bedroom, I sat helpless in the living room or stood outside. Waiting. Your glasses were sitting near your computer on that plastic table near your recliner. Some time during the waiting or maybe immediately after the paramedics stopped trying to save your life, I went to the table and I picked them up. I couldn’t let them go. I held them, put them in the pocket of the hoodie I donned once the shock set in and I began shivering, touched them again and again, rubbing the nose piece as a useless attempt at comfort.

They were indispensable to you, the lenses through which you viewed the world, and it seemed appropriate for me to attach myself to them. You no longer needed them, but I did. I needed them because they were yours, an intimate part of your existence. They touched your face. They were with you whenever you wanted to see clearly.

When it was all over, after you’d been taken from the house, after I arrived home grief-stricken, exhausted but unable to close my eyes, I set your glasses on my dresser, weeping as I did so. When I awoke the next morning after the saddest sleep of my life, I saw them there. A heartbreaking reminder of the person who would no longer peer through them ever again.

I went to Mom’s house the next day. Your absence became a permission slip which I used to touch the things you touched, lifting up objects on your desk, peering in boxes, flicking through files. How odd it was, knowing I’d never dare become so well-acquainted with your belongings had you still been alive. But you were no longer there to mind and something about you being gone made me want to touch everything, know everything.

Since the moment you left this world, I’ve become a scavenger of memories and mementos. I want to know more, I want to know you as someone other than my Papa. When people post photos of you on Facebook, I save them to my computer. Anything to do with you interests me, fascinates me. I feel like a vulture of sorts, gobbling up crumbs to piece together more of you, keep you real and alive even though you’re gone. I am a collector now—-a collector of history, of memory, of knickknacks, of stories. And I’ll keep looking, keep gathering, until the pain of losing you is nonexistent. Until I have you back. 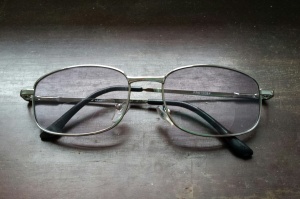