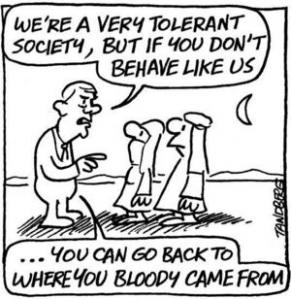 Last year, I attended a graduation ceremony at a Christian school where the class valedictorian, in listing off the many things she had learned during her time at that school, made the bold statement that her Christian education enabled her to tell anyone what a Secular Humanist believes. I took umbrage at this declaration for a few reasons:

My higher, better self sympathized with the girl because having been raised with a Christian worldview and having attended multiple Christian colleges myself, I went through a stage where I thought I knew everything there was to know about other worldviews because I’d read books by Christian authors and had discussions with other Christians about said worldviews. But I never actually conversed at any length or depth with anyone of those worldviews and never felt the need to because I already ‘knew’ what they believed. But my higher, better self wasn’t the source of my first emotional response because my first emotional response was anger.

I was angry because I had been Other-ed. Unintentionally or not, this girl had decided that she already knew what made me tick and was thereby excused from actually engaging with me or other Secular Humanists because she believed she already had all the answers. I was angry because a previous conversation with one of her classmates had left me with the impression that these teenagers were being raised in environments where they were isolated from all but a passing acquaintance with people of divergent beliefs and yet they felt comfortable and justified in making sweeping statements about those individuals. I was angry because one of the teenagers in the class had posted a question on Facebook asking what Secular Humanists believe (for a homework assignment) but when a fellow Secular Humanist  responded and offered to answer any questions about the worldview from a Secular Humanist perspective, she ignored him because she was looking for school-approved answers and not real dialogue. I was angry because, as not-a-Christian, I was tired of being Other-ed by family members, friends and former friends (who stopped associating with me when I came out as not-a-Christian), acquaintances, and much of the polite Southern society with whom I have engaged.

Being Other-ed hurts. It makes me feel marginalized and disrespected when someone thinks they know me because they can attach a label to one minuscule, hardly-worth-mentioning aspect of my entire person. I am infinitely more complicated than some one-size-fits-all concept of a worldview, and I want to be respected as such. Being Other-ed isolates me. When someone is the Other, it is easy to fear them or be uneasy around them. I have experienced physical, conversational,  and emotional avoidance by those who consider me Other and it sucks. A meaningful relationship is hard to build when one person in the relationship avoids myriad topics for fear of delving into a subject where there might be disagreement. I hate being Other-ed and, despite the fact that it has happened too many times to count, I am still not used to it enough to not be bothered by it. But being Other-ed has also opened my eyes to see where I am guilty of Othering people, too. For more on my experience as the Other-er, I hope you will join me for “Exploring the Other (Part 2): You Are the Other” on Thursday.

What is your experience with being Other-ed? What bothered you the most about the experience?

3 responses to “Exploring The Other (Part 1): I Am the Other”