The sun was not shining when I woke up this morning, probably because I was up so darn early. Usually I love being awake early in the morning, but today I felt out of sorts and grumpy, trying to squeeze a bunch of tasks into the short time before I leave the house at 8:30 am. I went outside to do my morning chores, letting the chickens into their daytime run, watering the backyard plants, and watering the garden. Watching the chickens always improves my mood, but this morning I didn’t have more than a second or two to spare watching them before I had to move on.

Spending time in my garden is another sure-fire mood booster and, happily, today was no different. Although I began watering with a furrowed brow, I found myself smiling a bit as I took time to water each plant at their roots. You cannot rush a good watering job, so I was forced to slow down and I examined each plant as I gave it a long drink from the hose. Because I slowed down and focused on the plants, I saw something that I hadn’t seen just yesterday. The first little cucumbers have popped out. There’s nothing like the thrill of seeing something I planted and tended start to bear fruit and my mood went from glum to cheerful with just a few glances at the new cucumbers. Those tiny little green blobs inspired me to look for other hidden moments of happiness today instead of just focusing on moving from task to task as quickly as possible. Just when I needed it, my garden gave me a fresh perspective. 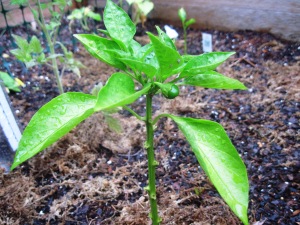 My chocolate pepper is coming along nicely, too.